The following content is best viewed on a desktop and has not been optimised for use on mobile and tablet devices. The content will appear fullscreen.

Find out more about airway hyperresponsiveness

Come back later this year to learn more about how epithelial cytokines are involved in airway hyperresponsiveness.

What is airway hyperresponsiveness?

Airway hyperresponsiveness, a cardinal feature of asthma, is associated with a heightened bronchoconstrictive response to stimuli that would produce little or no effect in healthy individuals.1,3

Airway hyperresponsiveness is a key part of the diagnosis and management of asthma as well as the asthma severity classification.3 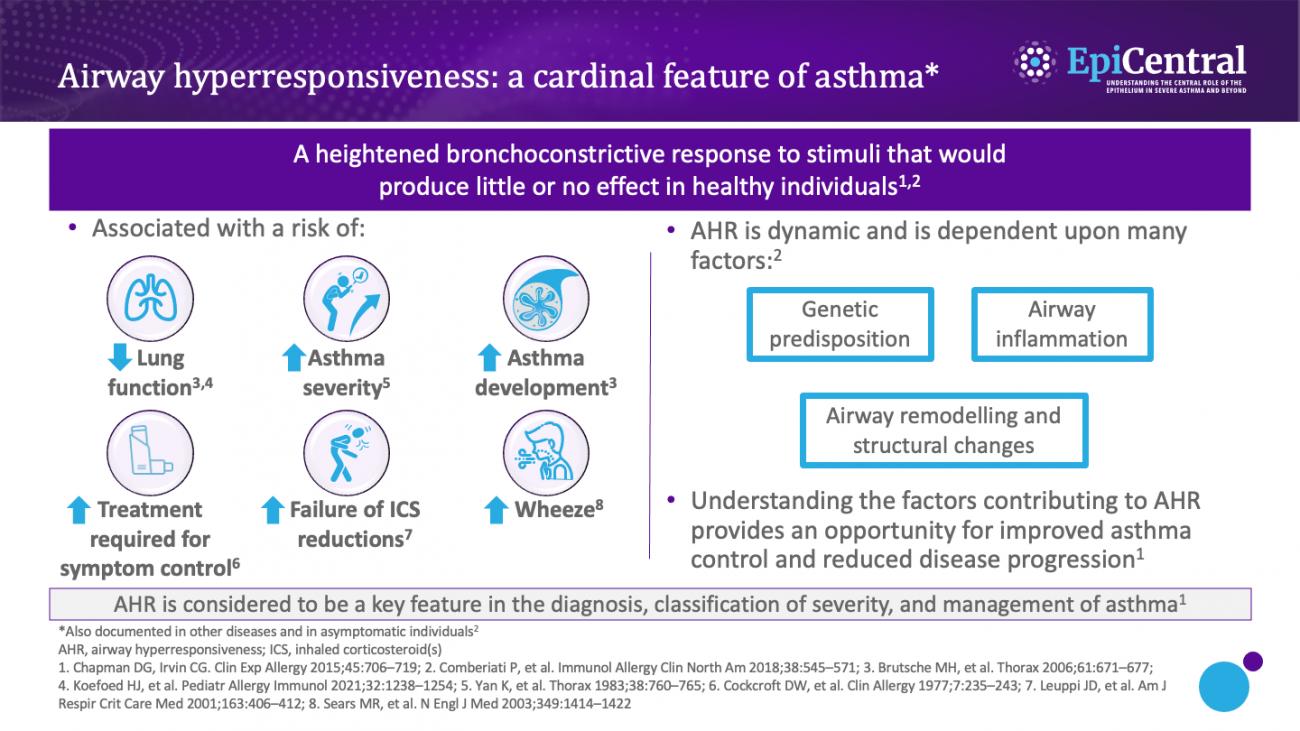 An overview of airway hyperresponsiveness

Revisit EpiCentral in 2022 to find out more about the role of various cytokines in driving airway hyperresponsiveness.

What is airway remodelling?

Physiologically, airway remodelling is defined as a change in the composition, distribution, thickness, mass/volume, and/or the number of structural components observed in the airway wall.4

It occurs as a result of ongoing chronic inflammation due to the activation of inflammatory cells, such as CD4+ T cells, eosinophils, neutrophils and mast cells.5 For example, infiltration of mast cells into airway smooth muscle and the resultant interactions between the two cell types is associated with disordered airway function and airway hyperresponsiveness.6 Airway remodelling may also occur as a result of mechanical stresses compressing epithelial cells lining the inner surface of the airway, which results in mechanotransduction and overproduction of asthma-related mediators, growth factors and goblet cell hyperplasia.7–9

Clinically, airway remodelling can present as persistent airflow obstruction despite aggressive anti-inflammatory therapies; it is associated with poor clinical outcomes in patients with asthma.5 Owing to the significant effects airway remodelling has on lung function, including its involvement in airway hyperresponsiveness and airway obstruction, it is believed to be responsible for the chronicity of asthma.5,10,11

Come back in 2022 to learn about the structural changes involved with airway remodeling and the driving role of epithelial cytokines. 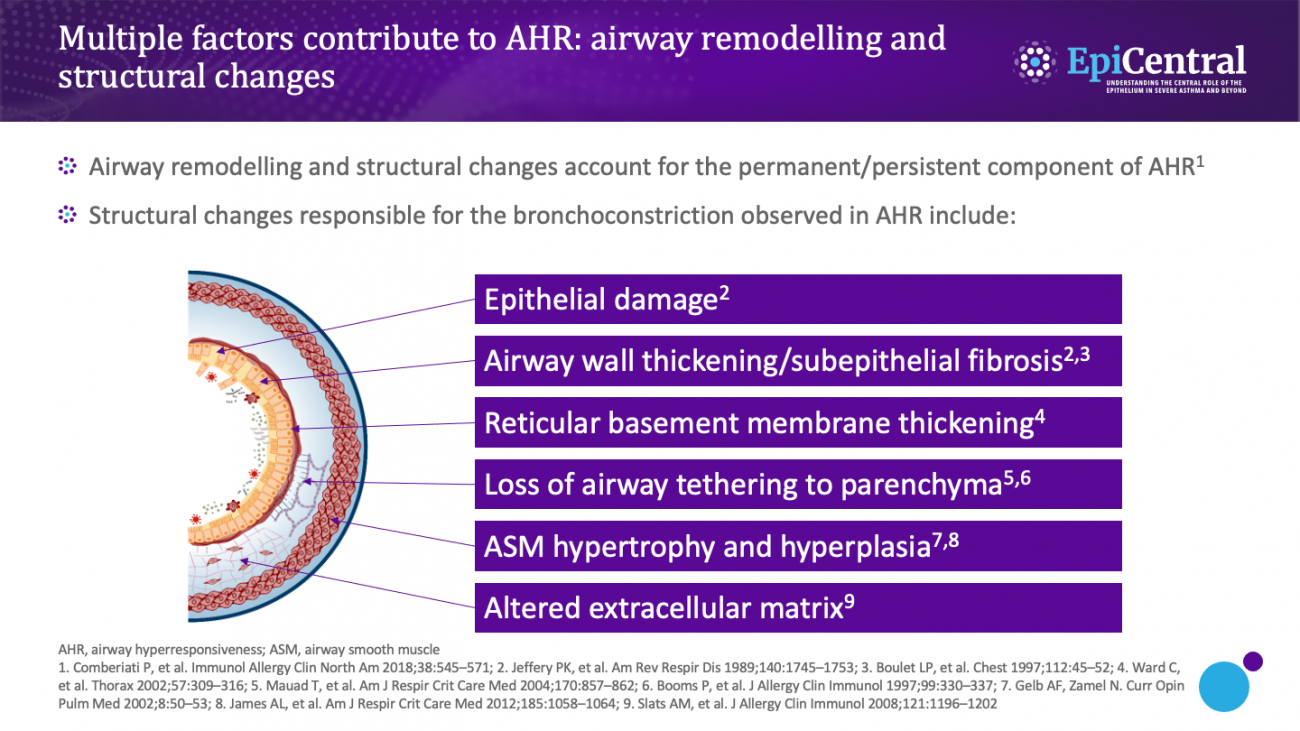 Airway smooth muscle (ASM) hypercontractility – another cause of airway hyperresponsiveness?

Distinct from the structural changes attributed to airway remodelling, in-vitro studies have shown that patients with asthma exhibit fundamental physiological changes in their ASM.2,12 Compared with ASM from healthy individuals, ASM from patients with asthma displays enhanced shortening and increased contractility, which is hypothesised to be another cause of airway hyperresponsiveness.2,12

What is airway inflammation, and how are mast cells involved?

Inflammation forms part of the body’s natural defence mechanism, which under normal circumstances is beneficial.13 However, when the inflammation becomes chronic, it can lead to disease, as is the case with the chronic airway inflammation experienced by patients with asthma.13

Mast cells play a critical role in airway inflammation and hyperresponsiveness; infiltration of mast cells into the ASM and the resultant secretion of proinflammatory and profibrotic mediators are thought to play a predominant role in the cellular and structural changes associated with airway hyperresponsiveness.6,15–17 Mast cells from human lungs have been shown, in vitro and in situ, to be in a continuously 'activated' state when cocultured with human ASM cells, with evidence of ongoing degranulation and expression of T2 cytokines.18

Could increased expression of epithelial cytokines play a role in increasing interactions between mast cells and ASM? Revisit EpiCentral in 2022 to investigate further. 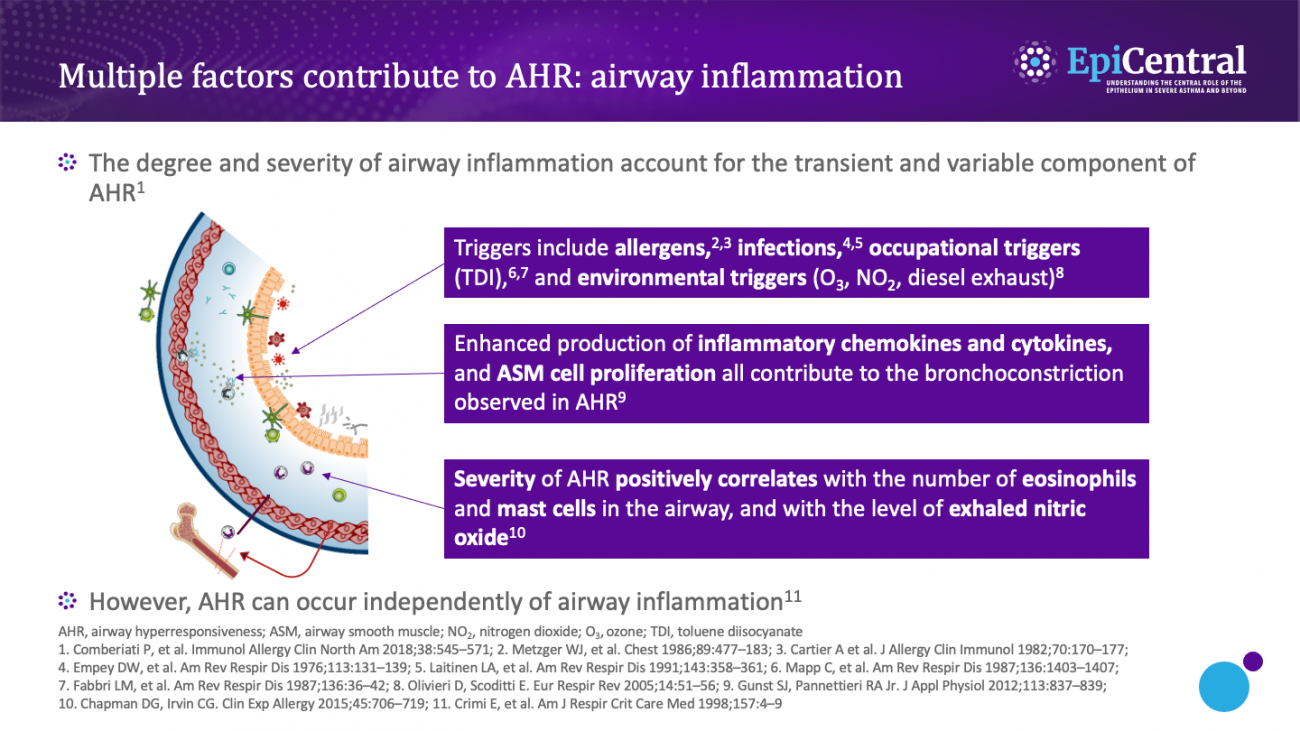 Airway inflammation, airway remodelling, and the hypercontractility of ASM can be considered independently; however, it is the intricate interplay of these events that makes asthma all the more complex.1,2 In 2022 we look forward to expanding on these factors to better understand the interplay and investigate airway hyperresponsiveness in greater detail.

Find out more about the EpiCreator – Professor Bruce Levy

Restart the learning journey and reread the 'Challenges in severe asthma' module.

Like this page? We have a host of other resources available in the ‘Scientific and Resource Library’ where you can find out more.